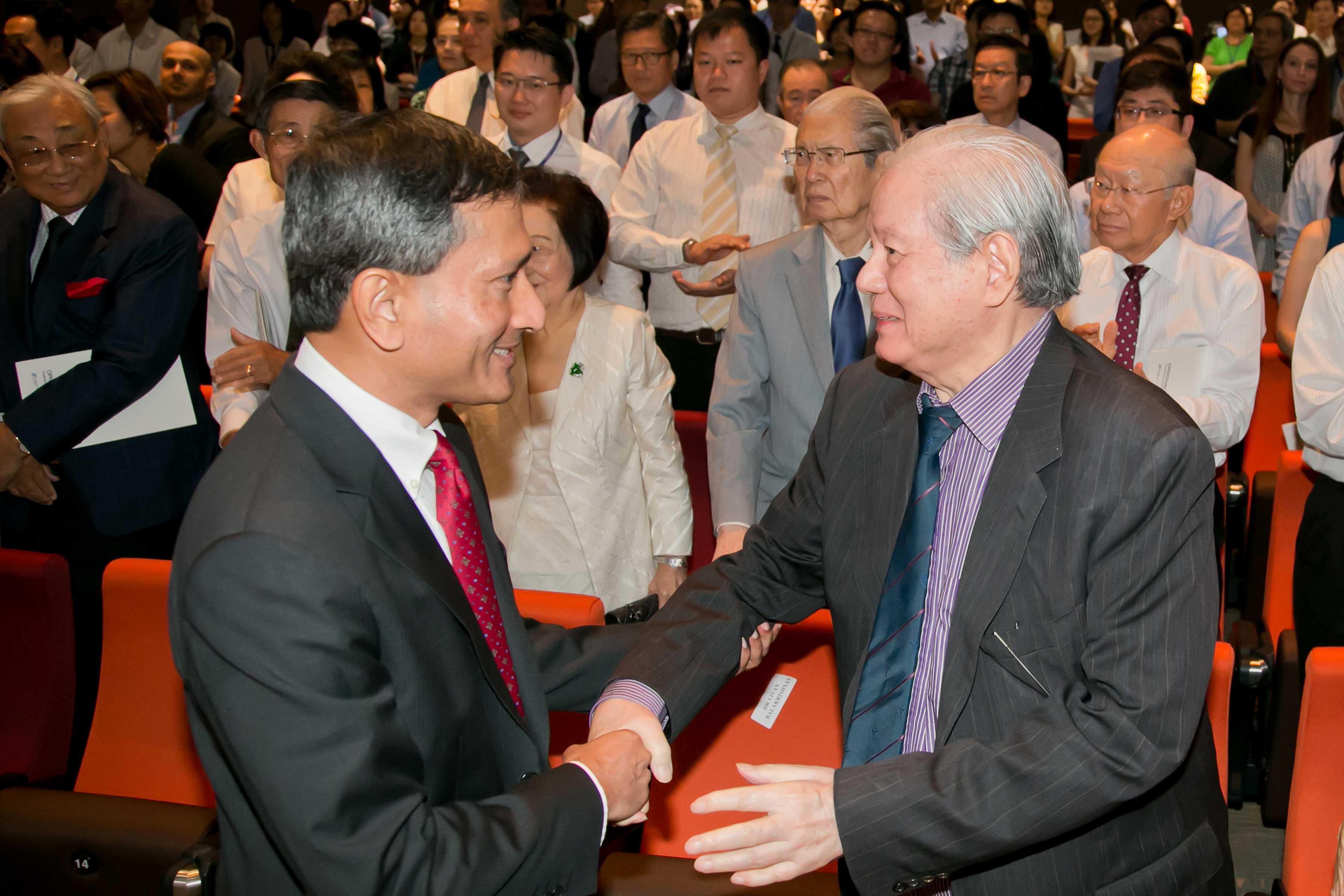 We gather here with deep gratitude and affection to celebrate the life of Professor Arthur Lim – a man who restored sight to so many and transformed our lives. Like all of you, I can say with absolute certainty that my life’s trajectory would have been very different if not for Arthur. For 30 years, he was always there for me at almost every single significant turning point in my life.

I first met Prof Lim when I was a medical student. Everybody seemed in awe of this dashing, confident, driven and brilliant man. We knew he was very successful in private practice, but there was something unique about his attitude to wealth and success. He was very ambitious, but power, money and fame were not ends in themselves, but merely the means to pursue more meaningful and significant goals in life.

Arthur never settled for pedestrian goals. He always had big dreams. He didn’t count pennies or have timid plans. He never lowered his ambition in order to make success easier. He was never paralysed by uncertainty. He turned dreams into reality.

We live in times of great change, and many people are challenged or even distressed by the pace of change. But not Arthur. He anticipated change, he made change happen. He made us share his dreams – through sheer force of personality, persuasion and single minded focus.

I met him a few years later when he interviewed me for ophthalmology residency at NUH. He had started the Department of Ophthalmology at NUH, then SNEC and SERI. Ophthalmology was at that time considered a minor surgical discipline. Medical research was at best a hobby horse for a few dedicated overworked clinicians.

He brought the International Congress of Ophthalmology to Singapore in 1990 – the biggest medical meeting ever to have been held in Singapore at that time.

He wanted to ensure that 1 million patients in Asia would rapidly have access to cataract surgery using the latest and best microsurgical techniques and implants. Many people thought this was hyperbolic but he proved them wrong. He started microsurgical courses for thousands of doctors all over Asia. He never kept any trade secrets. He shared all his clinical wisdom freely. I recall the weekly Tuesday evening tutorials at Mt Elizabeth. I recall the operating sessions in both private and public hospitals. I recall him giving us full access to all his cases notes for research. He was never insecure, but perfectly happy to see his students grow, and even happier when we broke new ground.

He was always extremely generous with his time and money. Every cent of the allowance that the government gave him for all his work in public hospitals was donated for research and training. So many of us took our first trips to overseas conferences due to his generosity. It was no accident that President Tony Tan appointed him as the founding Chairman of the Universities Endowment Fund in the early 1990s. It was a costly exercise to be a wealthy friend of Arthur in those days – and he ‘taxed’ so many of you to support our universities.

I also remember Arthur as a devoted and loyal friend. He introduced me to Dr Lim Hock Siew many years ago. And Hock Siew told me how Arthur always stuck by his friends, no matter how things turned out. There are many of you here who have experienced his steadfast loyalty. You could count on him, in good times, and especially in bad times.

Arthur used to tell me the story of Dr MK Rajkumar. He shared a hostel room with him in 1954. Rajkumar was a founder of the University Socialist Club and was arrested and charged for sedition in what is now commonly called the Fajar trial. While looking for Rajkumar, the British police officer rounded up one Eurasian and five Chinese hostelites – and asked which of them was Rajkumar. Arthur Lim raised his hand and said “I am Rajkumar”! I suppose the British police officer was colour blind. But more seriously, Arthur was colour blind. He had friends of all races, and treated us all equally.

Richard will tell you more tomorrow about Arthur as a father. But I thought I could share some external perspectives. He was always enormously proud of Richard, Lynette and Michele. I know, because he often described with great pride your achievements as all of you made your ways through life. And for Mrs Lim – you have been a totally devoted wife for almost six decades. Knowing Arthur, I know it has not been easy. But he always told us he beat all the competition to get the most beautiful girl. And you have continued to be a model of elegance and dignity throughout. You told me last week that you wanted to do your duty. I hope you derive some comfort from knowing that you have more than fulfilled your duty to him.

The past few months, and especially the last few days have been quite traumatic for those of us closest to him. Quite frankly, I didn’t agree with all his choices. But I was also quite sure that he had made up his mind in his own unique way. He was lucid, logical and consistent all the way to the end. And so we had to respect his plans.

I am glad he is now at rest. On the last evening, I held both his hands tightly and told him that God would lift the burden from him. Dr Ang Beng Chong ministered to him and prayed with him. I am glad the burden has been lifted – although I suspect he is now causing an upheaval in heaven because the status quo is never good enough for Arthur.

I bid our mentor, our leader, our teacher and our friend farewell for now. The most important measure of a man’s lifetime achievements is not just the sum of all the work he himself has done – of the thousands of cataracts he has removed or the hundreds of thousands of patients he has touched. The real test of a man’s legacy is the people, the institutions, the systems that will persist and grow long after he has left the scene. He has given us so much, and it is now our duty to pay it forward. We promise we will never forget the lessons you taught us, we will continue to build the institutions you started, we will transmit your legacy to the future generations of doctors and patients. May God bless your soul and your extended family. And may we all thank God for the privilege of being part of his life.