Just returned from Indonesia where I met ministers responsible for the environment from  Brunei Darussalam, Indonesia, Malaysia and Thailand at the 14th Meeting of the Sub-Regional Ministerial Steering Committee (MSC) on Transboundary Haze Pollution.

We agreed that errant plantation companies and land owners should be held responsible and accountable for much of the haze pollution as they, rather than small shift cultivation farmers, were the major cause of the problem. We need more effective deterrent and enforcement measures against offenders.

The National Environment Agency presented the use of geo-positioning satellite technologies to enhance hotspot monitoring (explanatory images at Annex A).

These emerging technologies are already in the public domain. I urged my colleagues to take the lead in enhancing transparency by utilising these new technologies and publishing accurate data, including concession maps. This would maximise regulatory, commercial and consumer pressure on plantation companies to avoid illegal land clearing activities (example at Annex B).

The Ministers agreed to explore the sharing of concession maps by MSC member states and the formation of a technical task force of officials to facilitate the implementation of this initiative.

(Note: MODIS Hotspot Data is freely-available updated and archived hotspot information from NASA. More information on the system is available at http://modis.gsfc.nasa.gov/about/.) 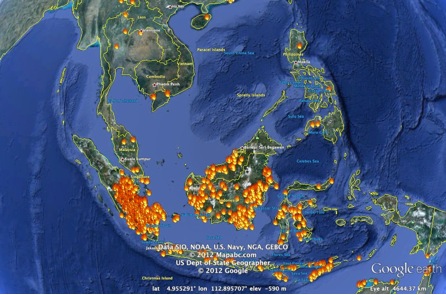 (Satellite photos show evidence of huge smoke plumes being blown from Riau Province towards Peninsular Malaysia on 25 Jun 2005 and 14 Jun 2012. Malaysia experienced one of its worst haze episodes in Jun/Aug 2005 with API readings as high as 424 (Hazardous Range) being registered, and Selangor declared as a haze emergency state. The API reading in parts of Peninsular Malaysia on 15 Jun 2012 reached as high as 147 (Unhealthy Range), which was recorded in Port Klang.)

A Medan high court had accepted the appeal filed by an Indonesian NGO and ordered the Aceh governor to revoke a permit issued to oil palm plantation company Kallista Alam for a 1,605-hectare land in the Rawa Tripa peat swamp forests. According to an investigation by NGO Indonesian Forum for the Environment (Walhi) earlier in April this year, Kallista Alam was alleged to have been illegally burning the protected peat swamp for plantation activities. The Rawa Tripa peatlands are included in a moratorium map which outlines primary forests and peatlands to be protected from forest-clearing activities.